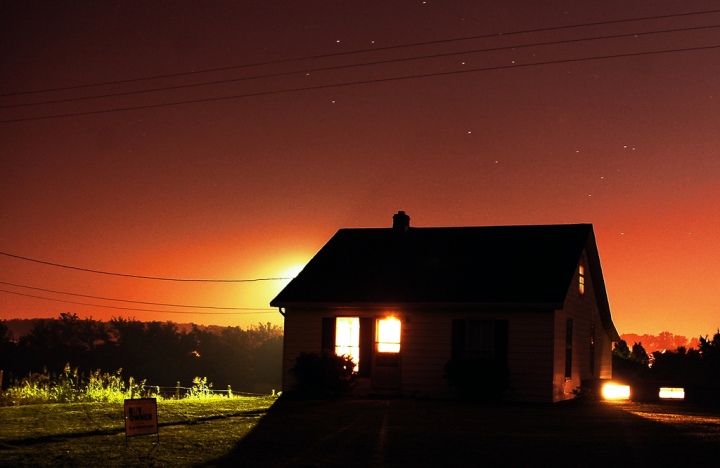 Long before I met Ben, and before I had that echoey apartment, I lived in a one-room log cabin that sat by a little pond in the woods. I lived there for two years, alone. There was no running water, no electricity. There was a wood stove and propane lamps and a little gas refrigerator whose broken pilot light I never fixed. In the tiny nook of the kitchen was an old-fashioned water pump that worked only once, some time around when I moved in, pumping thick black sludge from the bottom of the pond. I lived with a lame cat who couldn’t catch mice, and the mice stored cat food in the heels of my boots and in the baskets I kept high up on shelves. There was an old mantel over a defunct fireplace, a bed tucked in one corner, an old van seat for a sofa at the edge of the orange Oriental rug that was there when I moved in.

In fact, everything was there when I moved in. The former inhabitants’ leftover belongings told of the cabin’s previous lives: My home was a palimpsest of cabin dwellers. Little clues of who lived there before littered the place: an empty vodka bottle, jars of infused herbal remedies, a handicap toilet seat, the stock of a gun, a tanned squirrel skin, little jars of frankincense and myrrh, a replica of Rodin’s The Thinker in the outhouse, Anaïs Nin’s Erotica.

It was an old friend’s grandfather’s hunting cabin, or had been originally, and now belonged to a local land conservancy who welcomed me to live there but in no official way condoned it; they were not landlords, they said. They liked the place to be inhabited to ward off partiers, but in no legal way could they be responsible if, say, I died in my sleep from asphyxiation if the propane stove malfunctioned, or if there was a chimney fire in the woodstove, as had happened to the last woman who lived there.

I was never scared by the thick silence of the woods, by the liquid songs of coyotes that rippled down the hillsides at night. In the fall I learned to cope with the shotgun blasts of hunters, with the piles of deer guts out in the woods and the bloody trails left where the hunters had dragged the carcasses out. In winter, the snow was a blank slate upon which the wildlife made a cartography of existence: the bobcat tracks that crossed my own on a walk through an oak stand, the wing wisps where an owl swooped after a rodent in the snow. For this period in my life, I did not look into strangers’ windows at night. I mostly just looked out my own, at the moon casting long shadows across the glittering snow.

In the spring and summer I uncovered layers of vegetation. I hacked down the tall weedy grass to find lungwort and bloodroot growing beneath the trees behind the cabin. I sheared a hillside of invasive bittersweet and found a colony of foxglove plants, which, once freed, grew to a forest of thousands of stalks bearing their ridiculous, speckled pink bells. Everything was a sign of someone who’d lived there before, yet everything that was there became mine, my life. I absorbed it all, my life wrapping around the remains.

It was deeply silent. I lived there, I think, not only because it was fun and free and to prove to myself that I could do it, but to somehow confront myself. The solitude was sometimes bang-my-head-against-the-wall solitude, like Colette’s, or like Virginia Woolf’s character in The Waves, calling herself back to her body lest she step off the edge of the world into nothingness. It was a deep, aching loneliness, but a necessary one, where I worked through the mess to touch some internal abyss, where I waded through various lives and past lives, ghosts or demons or whatever you want to call them, to arrive at a little void inside myself. A small, singular void, so depthless it frightened me.

In some ways, I think what I sought was this place where I could search no further. Perhaps it took me two years to get there, to know a solitude so deep, to see that beneath all of this—my self, my being, my thoughts, my soul—there was a place where nothing existed at all. It was like I’d seen the very interstices of my atomic make up, the space between the elements that made me me, the space between them where the atoms didn’t touch. I could sense the me that was made out of nothing at all. Not air, not some infinitesimal molecular structure, not something so small it seemed like nothing—a true void, a vacuum, absent of anything at all.

The only way for my loneliness not to kill me was to stand there and look it in the face. The cabin was my first true home, and the only place that ever felt singularly mine even though the imprint of so many others existed there, even though it put me in touch with my own emptiness. Maybe home isn’t even the right word for it, but it was the place where—because of my daily confrontation with solitude, with my ability to acknowledge my own internal void—I felt like I truly knew who I was.

To read this essay in its entirety, GO HERE.